With an ever-increasing strain on the environment Adblue was introduced into the motor industry in order to reduce Nitrous Oxide emissions given off from vehicles.

If your car is a diesel car and was manufactured after 2015 then the chances are that your vehicle will require Adblue in order to keep it under the Euro6 emission regulations that were brought into action in September 2015. Adblue mixes with your cars emissions fumes, it reacts with and breaks down harmful Nitrous Oxide gases into harmless Nitrogen and water vapour.

Many people think that Adblue is a fuel additive, however this is NOT true. Adblue is an exhaust fluid that is always stored in a separate reservoir within the vehicle, the Adblue reservoir is then normally topped up by inserting Adblue into (usually) a blue coloured cap which will be located next to the fuel filter. 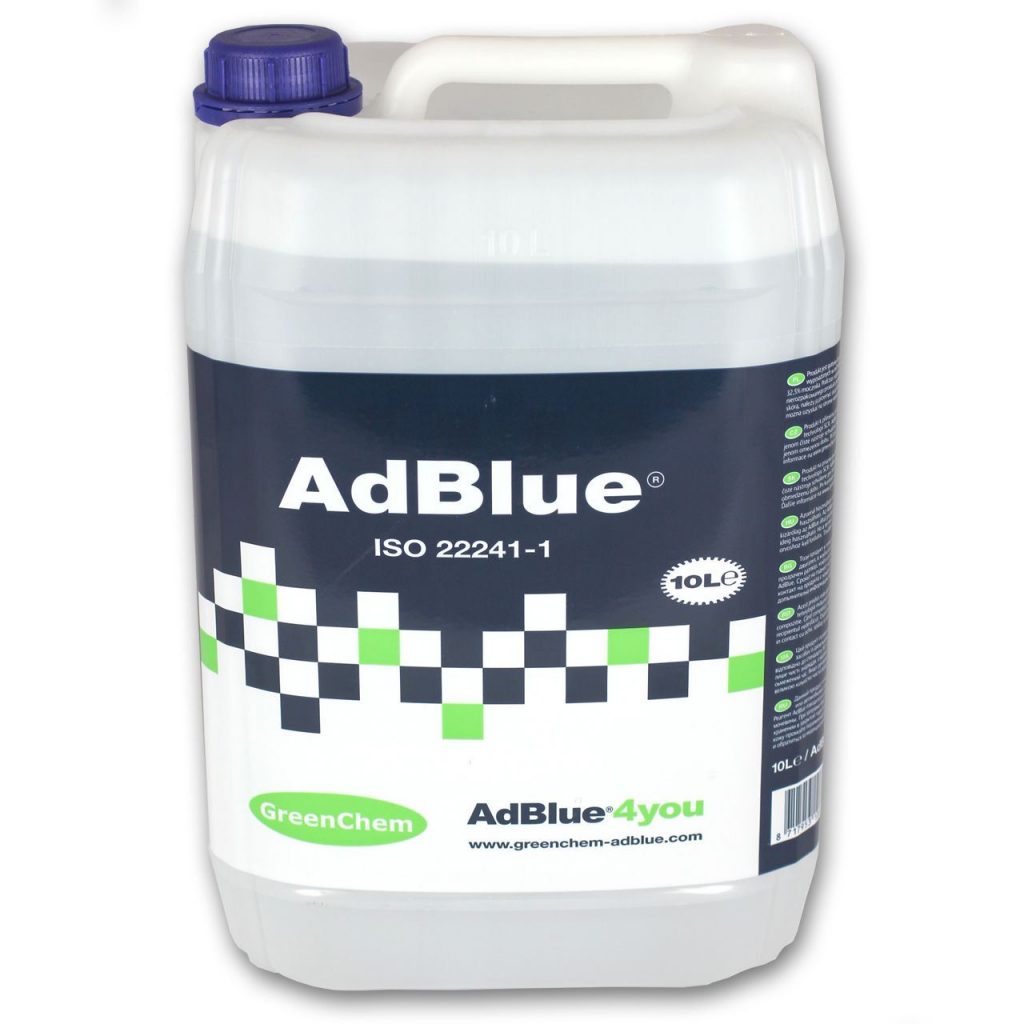 GreenChem offers special AdBlue® canisters with an integrated spout with a capacity of 10 litres.

This innovative spout will save you time and effort, thanks to its breathing pipe that help the product to flow out of the can easily.

Also, you do not need to look for the spout as it is always nicely and cleanly packed together with the canisters.

So what happens if i run out of Adblue ?

When your cars Adblue level is running low all cars will give a warning (this is usually around 1000 miles left to go) It is imperative that these warnings are acted on relatively quickly.

All modern cars have an Adblue gauge which in turn will notify the driver if the cars Adblue level is low, (this is usually around 1000 miles left to go) It is imperative that these warnings are acted on relatively quickly, if your car does happen to run out of Adblue whilst you are driving it then it will go into “limp” mode.

Your car will go into limp mode in order to reduce the amount of dangerous emissions given off and once the engine is switched off the car will not start until the Adblue is filled again.

Where Can I Buy Adblue ?

A huge range of retail stores across the UK supply Adblue in store, along with near enough every petrol station and service station up and down the country.

As with most products, Adblue becomes cheaper when purchasing in bulk. You are able to purchase 5 litre Adblue all the way up to 200 litre drums of Adblue which are usually purchased by Garages. If you are looking to buy cheap Adblue online then why not look at the latest Adblue products by Visiting Status Car Care’s online store.

What is Adblue made of and how long does it last ?

Adblue usually comes in the form of a colourless mixture which is made up of of high-purity urea (32.5%) and deionised water (67.5%), as set out in the ISO 22242 standard. The active ingredient that reacts with NOx in Adblue is the ammonia in the urea. The ammonia neutralises the NOx before it is released into the atmosphere.

Things to consider when using Adblue

Adblue freezes at 11.5 degrees celsius, however Adblue can be used again after thawing, in some colder countries Adblue tanks may require heating in the colder months in order to prevent freezing.

If your Adblue doesn’t turn into ammonia this can cause crystallization to happen, in turn this will more than likely cause blockages within the system.

Adblue is corrosive and can cause damage to yourself if you manage to get it on your skin or in your eyes/mouth and it will also damage paintwork if spilled on. It is advisable to thoroughly wash any spilled Adblue off with water at the earliest opportunity. When storing Adblue only store in purpose made containers.